It has become clear that the greed of our system is affecting us directly. The university students of South Africa are up in arms over the increase of their fees and the streets of The Republic are filled with protesters & police as the youth of the country rise up in revolt of the clenching of the iron fist of the cANCer in our government.

But it is not just the students that are up in arms now because as the government seems to have forgotten, the youth of the nation are the children of the workers of the nation. The parents & siblings & friends & relatives of the youth, The People, are also affected & so this protest, this revolt, is one very different to the protests for wage increases & law changes that have been almost the signature of our young democracy… it is a protest about the future of our nation.

By increasing the fees for tertiary education, our government moves the goal post further away from the children of the rainbow nation running for #TheSouthAfricanDream & it raises the summit higher for the economically hamstringed dreamers of the country to be able to change their lives. And by doing this the government fails to realize that they perpetuate a society where some people can live better than others. It perpetuates a society where hopelessness & desperation are allowed to take hold & crime is seen as an option. The thing the government fails to realize is that by raising the cost of university education, they are doing the total opposite of nation building… they are destroying the nation.

Now of course we will be told of costs & inflation & economics & the like. We will be told we should know our place & leave these things to better, more qualified minds. But then again we are presented with leaders that fake their own qualifications & tie justice up in bureaucracy to be able to control the outcomes of legal decisions. We will be told we are free to protest & voice our concerns & that all we need do is contact them & discuss any issues we have, but we will be assaulted & detained by the police & threatened with treason charges while the public is told otherwise & the government condemns the actions of their own enforcers to placate our placid minds.

But the realities of the #FeesMustFall protests are that the cost of education should not be tied to inflation. The cost of education is meant to be one of the costs of a government. The cost of granting our nation access to knowledge should be an operating cost of government as the end result is a population of enlightened & educated people who are capable of being involved in the building of their nation. The economic rise or decline should not affect the incubation of professionals & academics & entrepreneurs & entertainers & sportspeople & philosophers. It is our education system that arms the next generation of citizens & it should be a right, a requirement, or even a law that all education should be affordable. In fact education should be free.

The reality is that our police are not the bastions of justice & fairness in South Africa. If you ask any person how they feel when they see a police person or vehicle or logo, they will give you a reply that voices fear & distrust of those meant to protect & serve us. From the displays of incompetence & bad driving of the police on film, to the realities of the brutality & corruption showed by police worldwide on our televisions, to the travesty that is our own police force taking bribes & loosing dockets & assaulting the public & gunning down protesters in cold blood… we have been shown over & over that the police do not so much enforce the law but the will of their superiors. And that they are not here to protect & serve us but rather to intimidate & bully us. 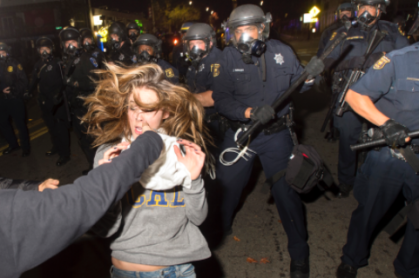 The protest of the youth of South Africa has now exposed our government as the thumb of oppression that they have become. It has shown us all that it is wealth they are after & that by allowing them to hold the positions of honor & duty that they do, we have allowed them to wield the power to enrich themselves at the cost of our rights & services. We have allowed them to be in control of the direction of our futures & they have steered us towards desolation & are even willing to sell us into servitude to other nations, all in the name of building wealth.

The protest of the youth of South Africa is proof that race, color & creed mean absolutely nothing when we all suffer the same fate. Whether it means that your family won’t be able to afford to pay for you to get an education, or it means that your parents will have to spend more money for you to get an education, or it means that you will have more debt once you have completed your education, the bottom line is that this is perhaps the thing we feared would happen if #Nkandla was allowed to go unresolved… that they would decide to steal from us directly. How brazen are they to decide to steal yours & or your children’s futures? They are very brazen because they are not the governing party as they have gone out of their way to hammer into our skulls, they are the Ruling party. And as rulers they are above us. As rulers they do not serve us but control us. And when we fight back, they use the tactics of the very people that they fought to free us from, they throw teargas at us & they assault us & they threaten us with treason & they detain us & they take our lives & nothing is done about it.

So stand in solidarity with the youth of the nation. Stand with your children & your relatives. Stand with your fellow South Africans & your fellow students & fight for the future of your nation. The fees must fall. Stand up & fight the detaining of students for protesting against oppression. Stand up & fight against the use of violence against the citizens of The Republic. Stand up & make a change in the status quo before it is too late & we are robbed of not only our money, but our opportunities & our capabilities & our freedoms & maybe even our very lives. Stop being afraid that you will be harmed or ostracized or criticized or whatever…

“Be the change you want to see in the world.” – Gandhi

“I learned that courage was not the absence of fear, but the triumph over it. The brave man is not he who does not feel afraid, but he who conquers it.” – “To deny people their human right is to challenge their humanity.” – “There is no passion to be found playing small, in settling for a life that is less than the one you are capable of living.” – “Sometimes it falls on a generation to be great. You can be that great generation. Let your greatness blossom.” – Nelson Mandela